“Although some African Americans are doing very well—enrolling in universities and graduate schools at record rates thanks to affirmative action—as a group, African Americans are doing no better than they were when Martin Luther King Jr. was assassinated… Nearly one-fourth of African Americans live below the poverty line today, approximately the same as in 1968. The child poverty rate is actually higher today than it was then. Unemployment rates in black communities rival those in Third World countries. And that is with affirmative action!” – from The New Jim Crow: Mass Incarceration in the Age of Colorblindness by Michelle Alexander

“The black middle class does not reflect a lowering of racist barriers in occupations so much as the opposite: racism is so entrenched that without government interventions there would be little ‘progress’ to boast about.” – from Turning Back: the Retreat from Radical Justice in American Thought and Policy by Stephen Steinberg

“The carefully engineered appearance of great racial progress strengthens the ‘colorblind’ public consensus that personal and cultural traits, not structural arrangements, are largely responsible for the fact that the majority of young black men in urban areas across the United States are currently under the control of the criminal justice system or branded as felons for life… Far from undermining the current system of control, the new caste system depends, in no small part, on black exceptionalism… Black success stories lend credence to the notion that anyone, no matter how poor or how black you may be, can make it to the top, if only you try hard enough.” – from The New Jim Crow: Mass Incarceration in the Age of Colorblindness by Michelle Alexander

As I was reading the LA Times article about the recent court ruling I was puzzled by a picture accompanying the article. “Why do they have a picture of this random black guy with this article?” I thought to myself. After a short Google search the confusing truth hit me: Ward Connerly is black.

Actually, Connerly describes himself as “multi-racial” as he is part black, white, and Choctaw Indian. And while he is light-skinned, he sure as hell looks black to me. As a light-skinned, biracial man myself I’ve learned that you don’t decide your race, everyone else does. In other words, race is a social construct. You can think whatever you want about your own racial or ethnic composition but in the end society dictates racial structures. This is why, born and raised in America (home of the one-drop rule), I’ve always identified as black. 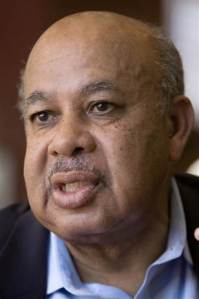 Look black to you?

Connerly’s blackness sheds light on another important facet of how racism has evolved in the post-civil rights era: what Michelle Alexander calls “black exceptionalism.”

In the past, racial oppression could be likened to a series of brick walls. Blacks, all blacks, were legally barred from certain schools, neighborhoods, occupations, etc… The Civil Rights Movement brought an end to that. In the present era, racial oppression could be likened to a metal cage. By and large, blacks are still prevented from attending certain schools, living in certain neighborhoods, and working certain jobs, but some are able to squeeze through the bars and attend elite institutions, live in white neighborhoods, and become CEOs of major corporations. Where Jim Crow barred all blacks, racism today bars most. This is how society at large is able to continue to operate in a generally racist fashion while creating the façade of equality and opportunity. Today’s system of racial control depends heavily on the presence of “successful” blacks, exceptions to the general rule, to legitimize the system and make most of black America believe that if they work hard enough, they too can achieve the American Dream. And in a sense that is true. Almost any individual can defy the odds and make it to an Ivy League school, a high paying job, and a secure lifestyle. But the odds are still against most black Americans. In reality, most will not achieve those goals. It’s like a casino game or the lottery. If nobody ever won, people would wise up and stop playing. But since some people win, we play; even though we know that we probably won’t win because the odds are stacked inexorably against us.

Obama is the ultimate black exception. Figures like Oprah, Bill Cosby, Bob Johnson, Debra Lee, and Richard Parsons are also powerful exceptions to the rule who are evoked as evidence that racism ain’t what it used to be. But you don’t have to be a celebrity to be a black exception. I, along with thousands of other black college graduates, am an exception. And that brings us to another interesting concept.

As a black Ivy League graduate, I know that I and many of my peers have benefited from affirmative action policies. Those policies have helped us become exceptions. And as exceptions, we legitimize the broader system of racial oppression in America today. So in another racial paradox, as affirmative action serves to improve the lot of some blacks, it also works to undermine the well-being of blacks as a whole.

In a sense this is not a new tactic at all and is just another manifestation of divide and conquer. Blacks as a whole were causing a ruckus, demanding equality, so the powers that be threw some of us a bone.  We were happy because we got to live the way that we wanted. The black community was weakened, divided and less able to find common ground on which to fight. Those who have not benefited from affirmative action have been fed a steady diet of guilt and blame which tells them, “It is not the system holding you back. You are holding yourself back. Look, there are blacks who made it. One of them even came from your neighborhood. You have no one to blame but yourself.” Blacks who have benefited from affirmative action have largely bought into this line as well. Thinking that successful blacks are better than the others; that we’ve gotten what we’ve deserved. While many of us pretend that we did not climb the ladder of affirmative action, Ward Connerly has taken a more extreme step and is attempting to pull the ladder up with him so that other blacks will be less likely to follow his footsteps. But the truth is that even though I pled the case for affirmative action in my last post and will continue to defend it, my position as an exception is used to undermine the legitimacy of affirmative action.

Bill Maher recently quipped that the new racism is acting like racism doesn’t exist. I agree. And as a black exception, I know that my success will be used to argue the point that racism does not exist and to undermine some of the very initiatives that allowed me to be successful.

*This post is basically an application of some of Michelle Alexander’s arguments from her book The New Jim Crow: Mass Incarceration in the Age of Colorblindness. I encourage everyone to read The New Jim Crow and learn more about black exceptionalism, affirmative action, and mass incarceration.

2 thoughts on “A Lesson in the New Racism: Dismantling Affirmative Action (Part 2)”