Okay, that’s not true. I actually care about all of those cases. They’re all important.

Justin Bieber and the corporations behind him have made millions of dollars off of shitty, watered-down, commodified, co-opted black music/cool/aesthetic. There’s a long history of white artists jacking black styles, doing it worse, and making way more money. Justin Bieber is one of the latest success stories. Evidence that he is overtly racist suggests that this process is actually carried out maliciously. Plus, it might discourage people from buying his music, which is a plus. 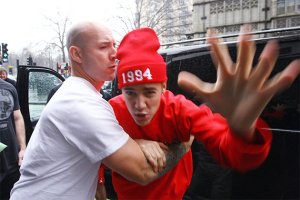 I wrote about Donald Sterling before so I won’t go into it here.

The cotton gin story is troubling because it is a clear example of individualized racism becoming institutionalized. It also offers some insight into the plight of the everyday black working class. Plus it happened at a cotton gin.

The crazy lady in the parking lot is upsetting because she’s a mom and she seems to be imparting her racism on to her kids.

What I do not care about is that these stories are evidence that racism still exists. I don’t need to hear Justin Bieber singing about killing “niggers” to be convinced that racism exists. If you want to prove that racism exists, there are way better and more important examples than some lady in a dollar store parking lot. But the media framing of these stories suggests that what is so shocking and important about them is that they show that racism still exists. Even the black man filming the crazy lady in the parking lot provides the commentary: “Racism is alive and well. Amazing.”

I have no problem with someone making the point that we do not live in a post-racial society. It’s true and it’s important to remember. The problem is when we forget that individualized racism is not the only kind of racism that exists. When we only focus on these examples of individuals engaging in racist behavior, we lose track of the bigger picture; we lose track of the systems that perpetuate a much more damaging kind of racism that reinforces individualized racism. I’m getting tired of writing about the media’s silence on institutional racism. The next time that I see a story about American racism, I hope it focuses on systems, institutions, and large-scale trends. Not some lady in a parking lot. If any media folks happen to stumble across this blog, here is some better evidence that racism still exists.